yesterday Chris and Steve participated in a 40k tournament hosted by Berks Warhammer 40k at HobbyTown. I went along for moral support. I almost made us very late - well, no. I did make us very late, but Chris was still able to play, so it was okay (though it did almost kill Steve). they didn't win, but they had a lot of fun, or so they tell me. I also had a good time watching; I can say that I have seen more hairy butt cracks so far this year than I saw last year, which is really saying something since this year is only two weeks old.

we went to Taco Bell for lunch. once again, they forgot my cinnamon twists. I always order cinnamon twists when I go to Taco Bell. in all the times I have been there, they have never, ever given me my cinnamon twists. we always have to go back for them or go without them. they also forgot one of Chris' burritos. they gave them to us, of course, when we went back and told them of their mistake, but that is not the point. this is no way to run a restaurant.

when the tournament was over, Steve and I were browsing the aisles. there was the coolest Yahtzee set I have ever seen, which I didn't buy because I had left my purse in the car. it's on my Amazon wish list, if you wanna buy it for me... but anyway, seeing it made Steve and decide to have a drunken Yahtzee night. and boy did we. I got three Yahtzees in one game. three! it was ridiculous! also, we were Rolling Around On The Ground drunk. like, seriously. ask anyone who was there - we were rolling around on the kitchen floor. I haven't been RAOTG drunk in a while, but I think it was just what I needed.

and do you know what? I wasn't hung over in the slightest, thus continuing my trend of never being hungover ever. no headache, nothing. I just slept til 11:00, which is pretty late for me. but we still got all the things done today that we intended to do, so no big deal.

I bought an awesome new sketchbook, which is part of my 4th resolution - draw more. I will draw (and scan and post) at least one drawing per week. not necessarily anything really awesome, just sketches and stuff that I doodle when I am bored. well, to being with anyway. I am hoping it will encourage me to do more meaningful works. so here is the first of (hopefully) many. 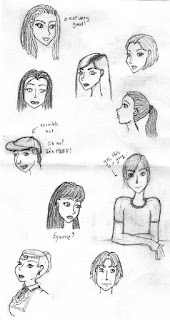 like I said, nothing amazing (or even moderately good), but at least it is something, right?
Posted by Kyra V. at 5:45 PM