it was a pretty productive weekend, though maybe not the most exciting weekend possible.

after work we went to A-Z Pet and Pond. we had called on Thursday, after searching every pet store in the county, and had been told that they had a tiger salamander and that they would hold it for us. as you can probably imagine, there was not a tiger salamander waiting there for us. shocking. so we drove all that way for nothing. they told Chris that someone would call him on Monday (today) about ordering one. bah. our next stop was Outback with Kim and Dustin. I got the Roasted Filet Focaccia Sandwich. holy crap was it delicious. like, seriously. go get one right now. I also got two margaritas. they were only $3.75 each - how could I pass that up? we got home around 10:00 and went almost immediately to bed because we are old people.

we woke up around 5:30 on Saturday morning, wide awake. luckily, we were able to go back to sleep for a few more hours and woke up for good around 8:30. we tried to make pancakes for breakfast, but both of our pancakes mixes had gone bad. so we gave up and went to the wyomissing diner for their breakfast buffet. it was delicious and amazing and I will definitely go there again. when we were done with breakfast, Chris went to stupid magic and I went to the Park City Mall with Kim and Dustin. Kim and I got bubble tea again, but Dustin was too much of a wuss to try it. we went to Long John Silver's for lunch, which was nice. I haven't been there in years! Chris was still at magic when we got back, so I went to my parents' house to do my taxes and eat dinner. when Chris finally did get back from magic, he wasn't feeling very well. so we stayed home and watched tv and went to bed around 11:30. because we are old people.

it was incredibly windy that night. so windy, in fact, that the carpet blew right off of our side porch! 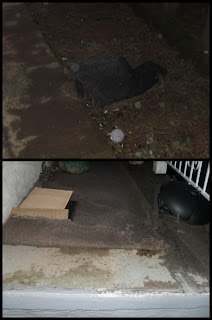 Sunday we went grocery shopping. we have switched to an every-other week system and it has been working out pretty well so far. we made up a meal list and everything. there was a bit of a situation when we couldn't find the beef stew, but otherwise things went smoothly. after groceries, we ordered some sandwiches and got to work cleaning the house. you see, I have a bit of a... hoarding problem. if I am not careful, Piles start to accumulate. they have been doing so since January, and it had gotten to the point that both of our living room chairs were covered in Piles, as was the kitchen table. and there was one next to the sofa as well. Chris, who had promised to keep an eye on me and my little problem, finally put his foot down and said that it was time to do something about them. so I cleaned them up. and we washed the dishes and did laundry as well. it took several hours and scared the cats quite a bit. I think they were afraid we were planning to move again. when we were finished, it was around 7:30. we finished God of War II, which Chris had been playing through again so that I could watch and be up to date when God of War III comes out.

oh, and by the way, I moved two swords and a battle axe up to the bedroom. Now I am ready should there be any intruders. so probably don't break into my house.
Posted by Kyra V. at 8:56 PM