I made dinner last night! I made garlic chicken & wine. basically it is some chicken that is cut up and browned in olive oil. following me so far? then the chicken is taken out of the pan and some garlic is browned in the leftover chicken olive oil. then you put the chicken back in and sprinkle it with a little flour. then you add a whole bunch of white wine (I used about a third of a bottle for two chicken breasts) and you let it simmer for about 20 minutes. then you add some milk (I used about a third of a cup) and let it simmer for another 20 minutes. then it is finished and delicious. 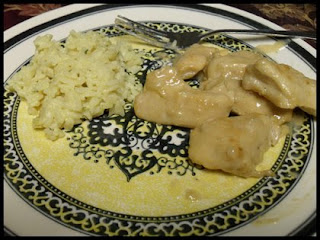 the picture doesn't really do it justice. I suggest you go ahead and make some for yourself.

A-Z Pet and Pond never called Chris back , so he called them. they said to call back in December, that they couldn't order any until then. DECEMBER? what is up with that? so I guess we're going to try the Pet Expo this weekend. The reptile show is going to be there this year, so that's pretty convenient. hopefully we will have better luck there. otherwise I am not really sure what we will do.

oh, and guess what came to my house in the mail yesterday - a check from the insurance company! I am not sure if I mentioned this before, but Nationwide insurance, who suggest you avpid at all costs, can not seem to actually insure us. it all started in December when they sent us a check and declared that we needed a railing on the side porch or they would cancel our insurance. we were pretty confused, since there is already a railing on our side porch. we went to the insurance lady and told her that, and she said they would get it straightened out. simple, right?

no, not at all. we got another check in the mail in mid January. Chris called, they said it was a mistake, that we should just shred the check and not worry about it. a few weeks later we got a statement in the mail telling us that if we did not pay $348 (the exact amount of the checks, strangely enough...) by February 13th, our insurance would be canceled. whaaa?? so Chris called and, over the course of two weeks, got it (supposedly) figured out. and now we have received a third check. marvelous. you know, I would think that an insurance company would be able to manage to keep us insured. what a crazy idea, right? so Chris called and left them a message, but as of yet we have not heard back from them. I want to go over there and give them a piece of my mind. a very large, angry piece. and tell them that if this is not fixed by the end of the week, we will be taking our business elsewhere. bunch of incompetent morons over there.