Chris and I had corn on the cob as part of our dinner tonight (we also had flounder, and I ate it - can you believe it?). one of our corns was pretty weird looking. check it out: 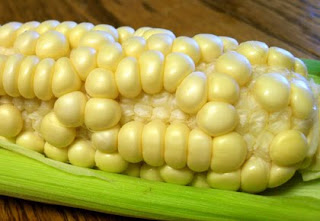 strange, huh? it's pretty deformed. but Chris ate it anyway and he reports that it tasted perfectly normal. Mutz also seemed to enjoy it.

so we watched that show, Life After People, on Sunday. well, we watched the first one. apparently they made a series out of it to flesh out the original one. it was rather creepy, but probably not for the same reason most people found it unnerving. the whole time we were watching, I could not stop worrying that my house could be rotting out from under me as I sat there. I mean, why does a house rot and fall apart and become overgrown when people are gone? what is stopping it from happening RIGHT NOW? what if there are tree roots growing through the foundation? it could collapse at ANY MOMENT!

Chris tells me that these things will not happen because we are here to stop them if they start to happen. I suppose this is a valid point, but still. I am concerned. owning a house is scary stuff. all these weird additional things to worry about.

it does not help that I had a dream about house problems on Saturday morning. in the dream, I woke up to find giant cracks running up the walls of my house. like, big enough that you could see outside through them. there wasn't an earthquake or anything, they just happened overnight. I think there may have been a windstorm involved? but yeah, so that show only further influenced my fears of drastic home malfunction. I walk through these rooms very gingerly, trying to avoid any unnecessary damage.

I should probably be medicated or something.