sorry for the complete lack of posts this past week. I was very busy with life. with looking for a sofa and taking that kitten to the vet, there wasn't a lot of down-time.

speaking of the vet, I have to again mention how amazing it is to know my sister in an adult capacity. Tuesday we had scheduled to take the Mako to the vet for his check-up. I know, I know, we waited quite a while. I am a terrible parent. but anyway, our appointment was at 6:20. Chris usually gets home from work around 6:00, so we figured it would be plenty of time, as long as things went according to plan. the last thing I said to him as I left for work that morning was "don't leave work late today, whatever you do!"

so at 5:45 I get a call from him. he has not yet left work (he gets done at 5:30); he can't find his car keys. I immediately begin a meltdown. there was no way, I informed him, that I could go to this appointment alone. not only was it a big deal and something I was not comfortable doing alone, but I didn't know exactly where the vet was located or where to park. for those of you who lack my severe stress problems, let me just tell you that this is an incredibly big deal.

I called my parents to see if one of them could go with me, but they had already arranged to go look at a car they wanted to buy. so I decided I would have to tell Chris to call the vet and reschedule. there was no was I could do this on my own. but then, my ever valiant sister came to the rescue. she would come along, she knew where the vet was located. she was even willing to walk into the building first, so that if we went in the wrong door, she would look dumb instead of me. and she would talk to the receptionist for me! terrific news!

so I called Chris, who had found his keys, and we decided to meet at the vet's office. so we got there safely, with my sister directing me, and we were only about five minutes late. but I seriously do not know what I would do without her.

there seems to be this thing between us, we are genetically designed to help each other through stressful situations. if I have a meltdown and am unable to function like a normal person, my sister is suddenly calm and collected and able to take on the world. if she has a crisis and cannot cope, I am suddenly efficient and cool-headed and ready to take charge. it is an amazing thing, really. I would be willing to bet that it happens without our knowing it when we are not even around each other. I would be willing to bet that my urges to clean the house and organize things and streamline the running of this household coincide with my sister's high-stress days. we are a well-oiled machine.

but yeah, in other news, we bought another sofa. hopefully this one will fit. it is gold velvet. yeah, that's right, you heard me. gold velvet. it was the last one and it came as a set, so they wouldn't just sell us the chair and sofa. I guess we will have to find a place for a love-seat... 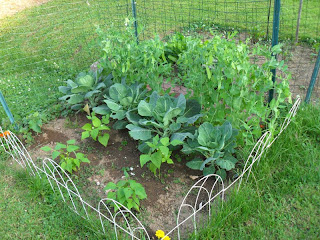 and here it is yesterday: 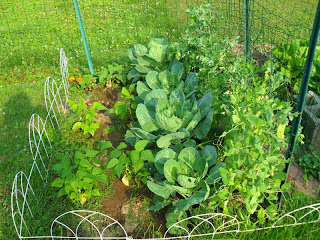 it is growing at an alarming rate! there were suddenly green beans on my green bean plants yesterday! and the cucumber plant has spread out quite a bit. it has a lot of flowers on it; I find it hard to believe that such a small plant can support that many cucumbers. but I certainly wont' turn them away! I think I am definitely going to enlarge the vegetable garden next year. this whole grow your own food thing is far to exciting.

oh, and here is a picture of me and Mako in the car. he is the most well-behaved cat I have ever encountered: 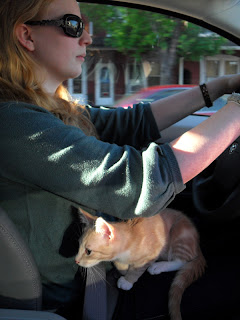 he seriously just sat there almost the entire ride home. no crying, no running around. he just sat there! and he was so good at the vet! I couldn't even believe it. and the vet sent us the nicest thing - a welcome card with a packet of catnip seeds! I really like that place, I am glad we chose to take Mako there.

and here is a picture of strawberry picking last Sunday with my dad and sister: 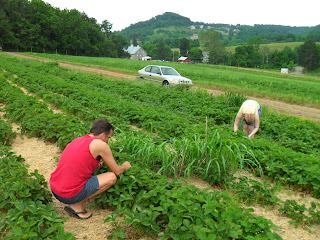 there was actually a tornado warning in effect while we were picking. it was very windy. but that did not stop us from picking 6.25 pounds of strawberries! they are so delicious! but I have to say, the prices were a little ridiculous. we went to Ontelaunee Orchards - it was $2.49 per pound, right? strawberries are $2.50 per pound at the grocery store! I think we should get more than a $0.01 per pound discount for picking them ourselves.

in other news, I was pretty drunk last night: 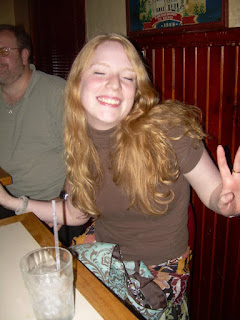 three white russians, two shots of some sort, and a coffee/hazelnut concoction by Kyle will do that to a person, I suppose. Chris and I started the night out with some of his co-workers. I probably made quite an idiot out of myself, but luckily Chris finds it endearing. then we went over to Steve's and continued to have a great night until 4:30 in the morning! shocking, I know. and I even woke up early on Saturday. I am not sure how I managed to stay awake for so long.

that should pretty much bring you up to date on my week 06/06 - 06/12. hopefully I'll be able to post more regularly this week. this post is entirely too long, I doubt anyone even made it down here to the end.
Posted by Kyra V. at 2:27 PM