my parents are back from Paris!!!  I'm glad they had a good time, but I am super-glad that they are home!  I missed them a lot and I hope that they don't go traveling again for a long time.

I am now the proud owner of an authentic Parisian baret and sweater, as well as some tea and an adorable one cent euro.  Chris also got a new hat and an awesome leather lighter.  I tried to take a picture of these things, but it is dark and the picture did not turn out well.  so I guess you'll just have to imagine them.  and I'm sure some of them will show up in future pictures.

Email ThisBlogThis!Share to TwitterShare to FacebookShare to Pinterest
Labels: family

so I did finish the Cozy Mystery Challenge, I just didn't actually make individually posts about all the books.  here are the books I read:

1: The Cat Who Could Read Backwards
2: The Body In The Library
3: The Cat Who Knew Shakespear
4: Peril At End House
5: The Cat Who Dropped A Bombshell
6: The Sittaford Mystery

I have to say, I really enjoyed this challenge.  I used to think I hated mysteries, but I have really come to love them.  they seriously make up a large majority of the books I've been reading in the last few months.  this list is only a sampling of the mysteries I have read/listened to over the last few months.  and I definitely intend to continue reading/listening to them.  thank you, Cozy Mystery Challenge!
Posted by Kyra V. at 10:20 PM No comments:

here are some songs I found while browsing the internet.  I greatly enjoy them.  I'm leaving them here so I don't forget about them.

tonight Chris and I made squash soup for dinner.  we baked the squash last night during my  vigil so that it would be ready to go when we got home from work today.  it worked out really well and it was delicious.  here, have some pictures!

oh, and in case you were wondering, my parents made it safely to Paris.  hooray!  last I spoke to them, they had taken 29 pictures of the Eiffel Tower and were heading out to dinner.  I ate a baguette with dinner as a show of solidarity.
Posted by Kyra V. at 7:43 PM 1 comment:

today Chris and I went to IHOP for breakfast/lunch/dinner.  we both got the new york cheesecake pancakes - they are just about the best thing ever.  like, seriously.  they are a stumbling block to me.  you see, I would like to try so many other things on the menu, but I cannot make it past the first page.  Chris and I swore a solemn oath that we will both order a non-breakfast item the next time we go there.  after that we went to Bed Bath & Beyond to check out their bathroom accessories.  we found a whole bunch of really neat sets that we liked - I cannot wait until it is time to buy them.  our bathroom is going to be the best bathroom ever.

after that we went to the Halloween Adventure store.  Chris was trying to get ideas for a costume, but instead he thought up a really awesome costume for me!  I am dying to talk about it, but I think I will keep it a secret.  I also think I will have two costumes this year- one for my party and one for answering the door for trick-or-treaters on Halloween.  I think for answering the door I will be the bride of Frankenstein.  or maybe I will leave that for next year.  I am not sure.  so many things to plan for October!  I need to decorate my porch, put together a menu for my party, decorate for my party, get my costume together, help Chris get his costume together...  the list never ends.  and on top of that, there are a bunch of autumn activities I would like to do in October as well.  I want to go to Green Valley Nursery, Weavers Orchard, the Home & Garden Expo, the Ren Faire...  it is going to be a busy month.  goodness, I am exhausted just thinking about it!

speaking of exhausted, you may notice that I am up way past my bedtime.  that is because my parents are currently 39,000 feet in the air, traveling towards Paris at 655 mph.  how can I be expected to sleep when I know that sort of craziness is going on?  somehow I feel that my obsessive tracking of their flight will help to keep the plane in the air.  and my wonderful Chris is staying up with me.  he's been really great today, suggesting we go to all of those shopping places when I know he would have rather been at home painting Mike's avatar.  and he continues to comfort me every time I become weepy for seemingly no reason, even though he thinks plane trips are not a big deal.  seriously, that guy's pretty great.  but don't tell anyone - it will ruin his image.
Posted by Kyra V. at 12:35 AM No comments: 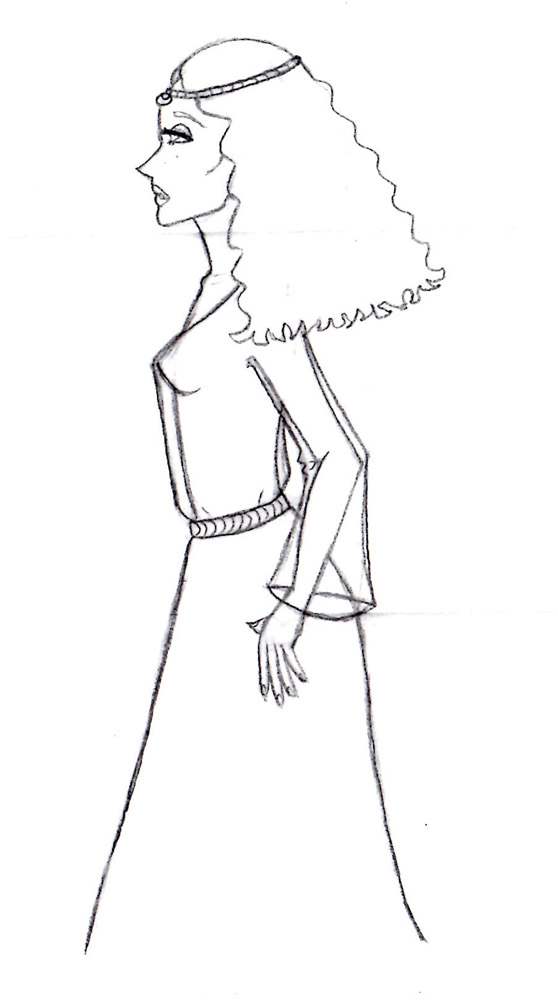 awwwwww!  it's time for cat pictures!!! 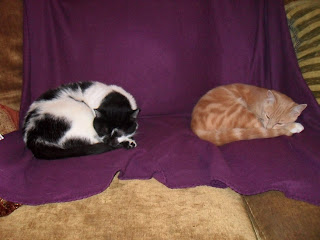 mark my words - they'll be cuddling by the end of winter. 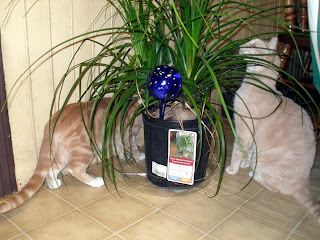 I brought in the potted palms aka the Cat Buffet.
Posted by Kyra V. at 9:39 PM 1 comment:

here's sketch #38 for your enjoyment:

I know, I know.  I am such a slacker.  I'm just very busy all of the time.  but don't worry, I've not fallen into a September depression. quite the opposite, actually.  there has been a happiness epidemic going on around here and I have certainly caught it!  I'm just excited and thrilled about so many things...  it's exhausting!  but strangely enough, I have been getting to bed later and later.  I just don't have the desire to sleep continuously that I preciously did.  I think this is a side effect of the happiness.

I'll be honest, I think a good deal of this happiness (for me anyway, I can't speak for the numerous others who have been infected by the disease) thing has to do with my recent engagement.  I never really expected it would make such a difference, but it really does.  I mean, don't get me wrong, I have wanted to marry this guy since my senior year of high school.  it's just that I didn't think, after living with him for two years, that actually being engaged would really matter.  it's strange the way these things work, isn't it?

but aaaaaaanyway, there's a new post over at The Hateful Hovel about the general style ideas for the bathroom.  right now the bathroom is completely empty except for pipes, but I am told that that should change very soon.  just another thing to be happy and excited about!

I had a night to myself tonight for the first time in weeks, and I decided to spend some of my time coloring a sketch, something I haven't done in a while. 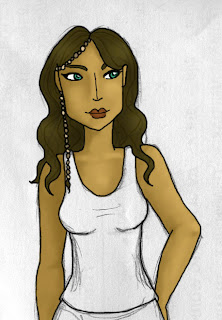 it's not the greatest thing I've ever done, but keep in mind that it is just a warm-up.  also, it's an older sketch.  I'd really like to do more arting.  I miss having the free time to just draw and color all day. and to think, I never appreciated all of that time!
Posted by Kyra V. at 9:40 PM No comments:

here are two late sketches and one that is on time. 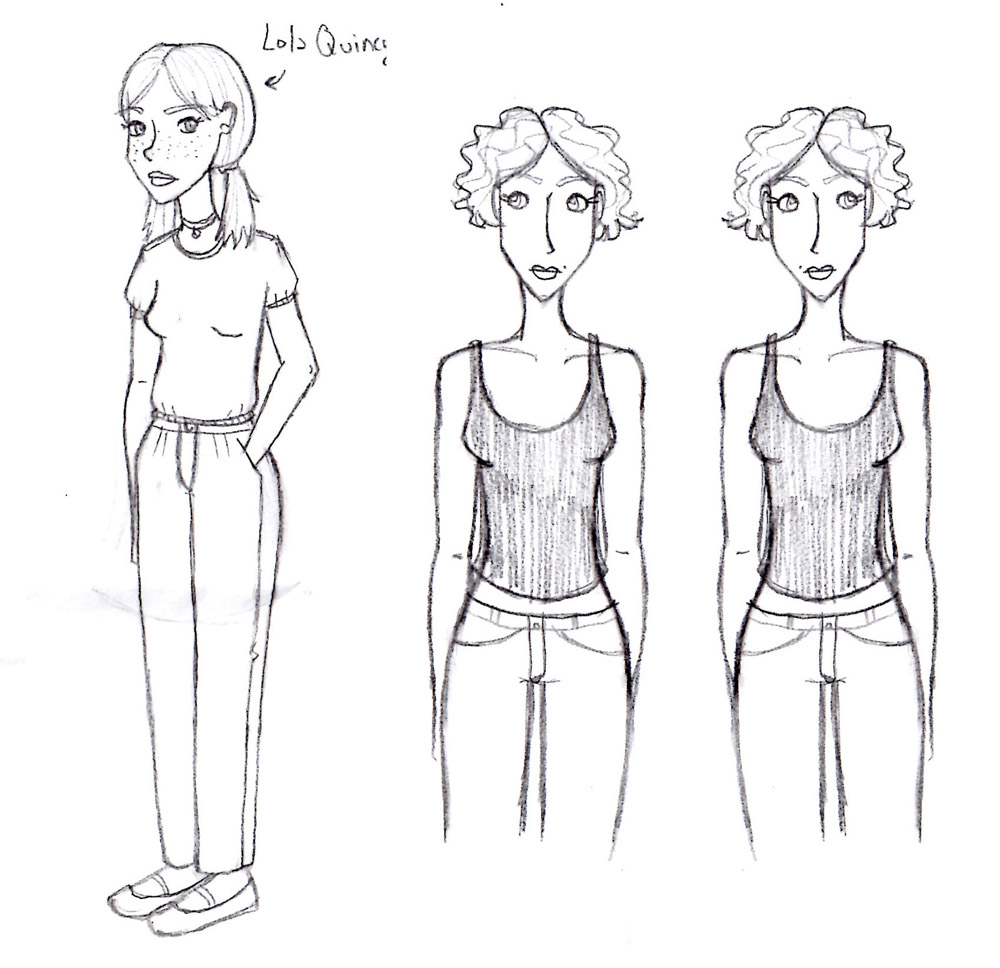 this is a sketch of book characters from some books we've listened to at work.  Lola Quincey from Atonement and the twins (Julia and Valentina) from Her Fearful Symmetry. 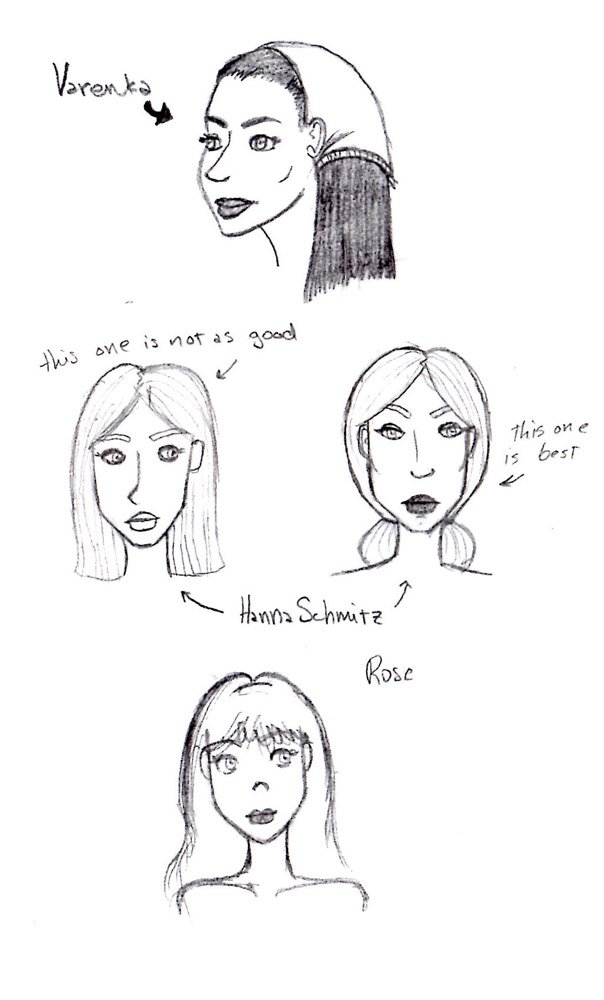 more book characters.  here we have Varenka from Anna Karenina, two versions of Hanna from The Reader, and Rose from The Forgotten Garden. 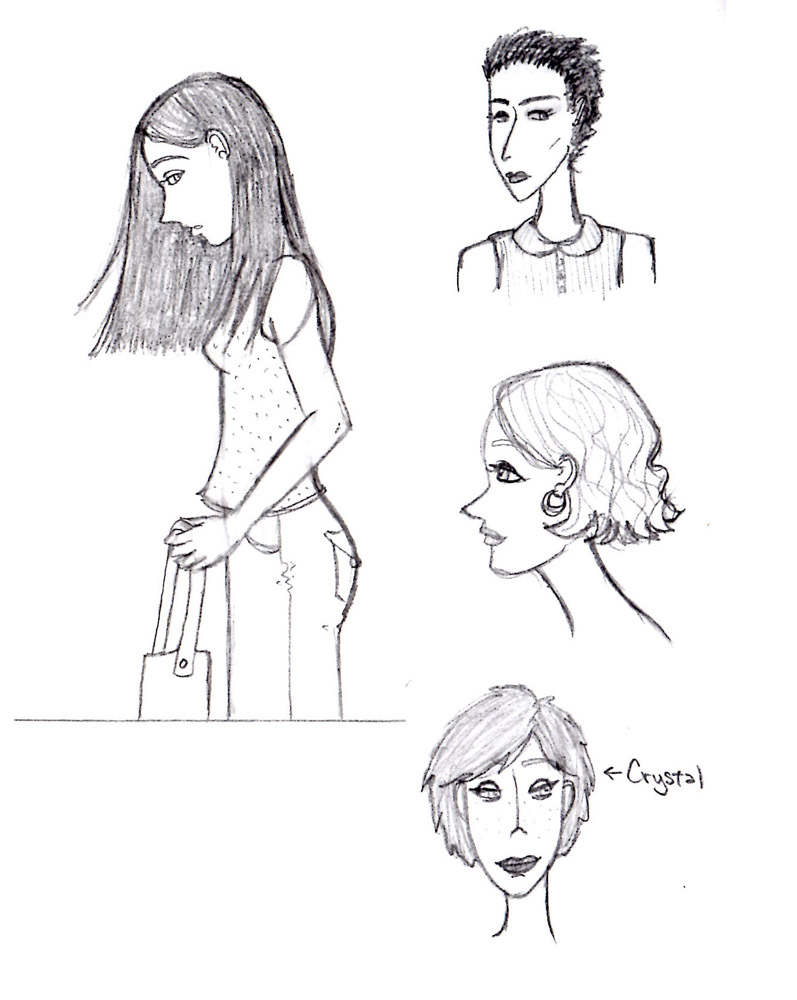 these are just random. no stories here, folks.
Posted by Kyra V. at 10:29 PM No comments:

Hey, check it out!  I finally uploaded my pictures from the last few weekends!  It is a miracle!

The first few are from Gamesday.  I didn't get very many because my battery died.  I brought my cord along for that very reason, but would you believe the cord died?  True story.  I had to buy a new one, which didn't arrive in time for my trip to the beach.  Luckily my co-worker let me borrow her (much better) camera, so I got lots of beach pictures.  I did have my camera for our trip to Longwood Gardens, so I got lots of pictures there as well.  Enjoy them!
Posted by Kyra V. at 9:57 PM No comments: