This song was stuck in my head when I was gardening over the weekend. It's about 300 years old, but I still love it.

Uh oh, I've been a bad blog updater.  Tsk tsk tsk.  Here are two sketches - one for this week and one for last week.

Concept sketches of my new D&D character. She is a spoiled half-elf with a shoplifting problem. Which do you think best fits this description?

Chris bought some really cool thin pens the other week and I have been screwing around with them, as you might be able to tell. I don't usually like inking on paper, I much prefer to do it digitally, but I am really liking these pens...
Posted by Kyra V. at 9:14 PM 1 comment:

Last Thursday I went to Starbucks with my co-worker over our lunch break.  It was a beautiful day, warm and sunny and wonderful.  At each of the outdoor tables, except for one, sat a girl with a laptop.  It was almost as though they had come straight off of an assembly line, there were so similar in appearance.  They were all petite and skinny and tan.  They all wore thin t-shirts and cut-off shorts and giant sunglasses.  Their hair ranged from blonde to dirty blonde to brown, but all of them wore artfully messy ponytails.  Their sandals and flip flops had all been removed and their bare feet were propped on the chairs across from them under the tables.

I was filled with the most intense jealousy I've felt in a long time.  How unfair!  I had to go back to work while these girls lounged about outdoors, drinking overpriced coffees.  How was that fair?  How could that be allowed to happen?

I have not been able to stop thinking about those girls ever since.  I have been fighting the urge to get a fake tan; my misguided mind thinks that maybe I, too, can live this dream if I have tan legs in cut-off shorts.  I know it doesn't make any sense, but there it is.

My coworker thinks that they were probably college students, which is probably true.  But it doesn't make me feel any better about it.  I didn't have a car or much money when I was in school, so I missed out on that opportunity to flaunt my youth in the sun.  Does that mean I missed my chance entirely?  It probably does, and that is unbearably depressing.  Well, maybe I can sun myself at Starbucks over the weekend at least.
Posted by Kyra V. at 7:14 PM 1 comment:

Okay, so, I'm going to link a bunch of pictures of me trying on wedding dresses so I can get some opinions.  I don't think Chris is going to accidentally come across these pictures since he doesn't read my blog, but just in case - CHRIS, DON'T READ THIS POST.  If you are not Chris, please click on the link below to see the rest of this post.

Chris and I planted our sprouts out in the garden.  Check it out!


Want to know more about the vegetable gardening process? Check out the Hateful Hovel! I figured I'd put some of this garden stuff over there, since it is impacting the appearance of the house (and that's what HH is all about). Go. Check it out.
Posted by Kyra V. at 7:46 PM No comments:

Email ThisBlogThis!Share to TwitterShare to FacebookShare to Pinterest
Labels: garden

So I decided on a camera, and it wasn't one of the cameras I had linked previously.  After reading the last camera entry, my sister texted me and and told me not to buy anything - that she would find me something better.  A few minutes later, she IMed me a link to the Panasonic Lumix DMC-G2

.  It is an actual DSLR for the same price as those fancy point and shoots.  And it still has a flip-out screen.  Pretty impressive, huh?  My sister should really get a job doing internet research professionally.

Of course, I am in a panic after spending so much money.  I never like buying anything over $100 - it makes me very uncomfortable.  I mean, I had the money to buy it no problem.  I just hate spending unnecessarily.  And this is the pinnacle of unnecessary items.  So now, to make sure that this money replentishes itself as quickly as possible, I will not be spending any excess money at all.  I will take my $40 per week free-spending allowance and nothing more.  No more going out to dinner every night.  No more!

I am also a little worried about my mental stability.  Well, that might be going a little far, but let me explain.  You see, when I was first trying to decide whether or not I really wanted to blow all this cash on a camera, I brought up the question to Steve.  He said that I should go for it - that perhaps I'd finally find my passion.  My passion is something for which I have been searching for a long time.  Most people have hobbies - things that they really enjoy doing and want to do all the time. Things that they think about and spend money on and talk about.  Steve plays Magic.  Chris paints 40k figures.  Kyle brews his own beer.  I have nothing.  There is nothing I enjoy so much that I'd always like to do it, let alone spend money on it.  There's nothing that I really like to do.  I always get bored with and sick of things.  There is not one thing I have tried that has sparked my passion.  How sad is that?  It's something on which I spend a lot of time dwelling.  But what if photography/videography is my passion?  My mind was pretty much made up as soon as Steve brought this thought into the conversation.

Now I am concerned that I am hanging all my hopes on this camera.  If I do not absolutely love it and immediately become an impassioned photographer, I will be incredibly let down.  If I only take photos and videos for a few days and then quickly lose interest like I do with everything else?  It might send me into a spiraling depression.  Keep your fingers crossed that this does not happen.

And keep your fingers crossed that it actually arrives before I am driven completely insane by the lack of it.  It is currently in Nevada, according to FedEx.  Ugggggh.
Posted by Kyra V. at 9:02 PM 1 comment:

Email ThisBlogThis!Share to TwitterShare to FacebookShare to Pinterest
Labels: shopping 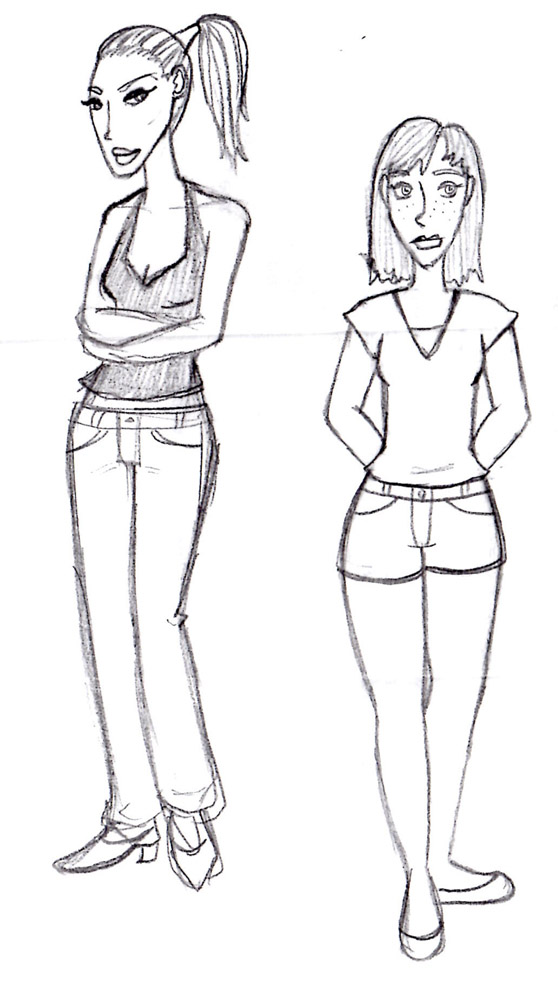 Seriously, these sprouts won't stop growing!  Well, most of them anyway.  We've had a few no-shows, but a large majority of our seeds are making a go of it.  I put them out in the yard this afternoon to get a little fresh air.

If you know me, you'll probably know that I am generally a money-saver.  I stockpile my cash and, as such, am very cheap in almost every situation.  Sometimes, though, I get a weird idea into my head and fixate on buying a thing for almost no reason.  Some notable examples from recent years are a paper cutter, a library-style date stamp, a blender, a smartphone, and a laptop.  There have been others, but those are the most random or expensive, in that order.  Now, you can argue that there was a legitimate reason for purchasing many of these things, but the fact remains that each and every one of them drove me into a manic state of need for about a week.  A week which ultimately ended in me breaking down and buying a thing I didn't really need.

This time it is a camera.  It started last Sunday when I spent my entire day watching vlogs on youtube.  Chris was working and it was raining (well, it was cloudy - but I was afraid it would rain so I didn't want to start gardening), so I had nothing better to do.  Don't judge me!  As I watched, I became more and more obsessed with the idea of having my own vlog.  No problem, I though.  I'll just use the video camera feature on my digital camera.  Or one of the two video cameras on my phone.  Okay.  Good.

But of course, there were problems with this plan.  If you watched my greenhouse haul video, you saw that the audio-video sync isn't very good on my digital camera.  So that is probably not a viable option.  Then, on Monday I tried to take video of myself making dinner on my main cell phone camera.  I didn't have much luck.  It was too hard to get good shots of myself, since the viewfinder screen was facing away from me.  I tried the camera on the front of my cell phone camera, but that had really crappy quality.  So I went online to see what the professionals suggest.  Oh, of course, a camera with a flip-put lcd screen.  I immediately began to feel the overwhelming need that precedes an impulse buy.

I mentioned my growing desire to buy a video camera to Chris and instead of trying to talk me out of it, he actually tried to convince me to spend MORE MONEY.  Why buy a dedicated video camera for $200 when you can just buy a really good regular digital camera with HD video capabilities and a flip-out view screen?  He pointed out that it would probably be cheaper in the long run to buy a high-quality digital camera anyway, since I spend about $200 on lower-quality cameras every two years or so.  Ugggh.  So not helpful.  But I did some more research online and it looks like a lot of people agree with him.  And so does my co-worker, who does a bit of photography on the side.

So now I have this burning desire to run out and buy a really expensive camera for relatively no reason.  I am torn between the Canon G12

Email ThisBlogThis!Share to TwitterShare to FacebookShare to Pinterest
Labels: shopping

Hey, check it out!  We've got some sprouts in our tiny greenhouse! 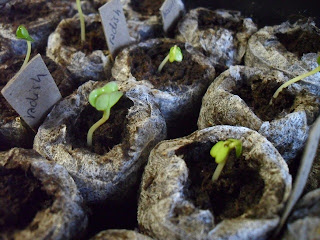 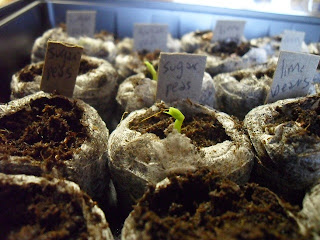 I really like the way the words in this song sounds.  The flow, if you will.

So tonight I tried a new recipe that I found in this month's issue of Food Network Magazine - Chicken with Pickle Sauce.  If you click on the link, you will see a lovely white cream sauce on a pristine chicken breast.  Mine did not look anything like that.  At all.


The real important thing, though, is taste - and it tasted pretty good if I do say so myself.  It was weird, but good.  A lot more pickley than I was expecting.  And saltier too.  But still good.
Posted by Kyra V. at 7:09 PM 1 comment:

Yeah, that title doesn't make much sense.  But that's okay.  Here are the sketches I should have posted for the last few weeks as well as the sketch for this week. 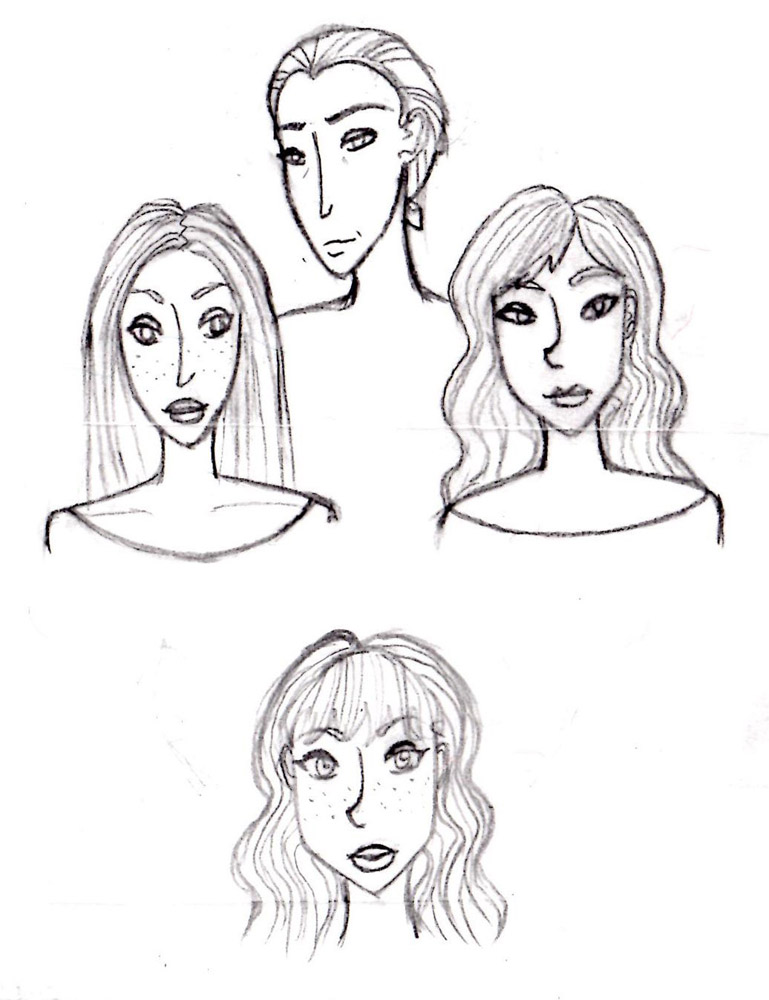 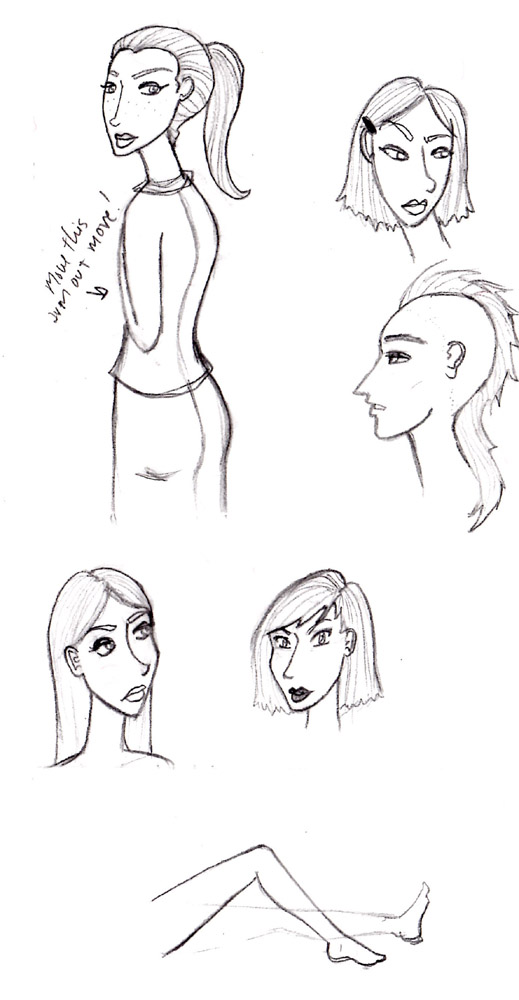