As I've mentioned before, going full-on paleo is not for me - but that doesn't mean I can't try some paleo recipes in an attempt to at least lower my carb intake a little bit.  A while back, Kylie made banana and egg pancakes.  I thought that sounded like a really gross combination, but she forced me to try them anyway and they were actually pretty good.  So last weekend, when I was home alone and hungry, I gave them a try myself.  They're super easy, if a bit time consuming.

As the name implies, you'll only need two ingredients - a banana and two eggs.  I usually use local farm eggs, but I ran out and bought a half dozen at the grocery store - that's why my eggs look so drastically different.

First step - mash up your banana.  I used a fork, but I guess you could use a blender if you're really lazy?

Next, crack your eggs into a separate bowl.  This step didn't really require a photo, I just thought it was interesting to see the difference in yolk between the grocery store egg and the farm fresh egg.  One is a lot cloudier than the other.  Can you tell which is which?

Now scramble those eggs together and add them to your banana mush.  I'll admit, the appearance is not exactly appetizing.

Now put some oil of your choice in a pan on medium heat.  Pour some batter and cook like regular pancakes - flipping when they start to bubble in the middle and look done around the edges.

A lot of the places I looked online said to make them small and one at a time because they are prone to crumbling, but I didn't have any such problems.  After a while I started making three at a time with no trouble at all.  I kept making them small though, because I love tiny pancakes.

And that's pretty much it.  I guess you could put syrup or jam or powdered sugar on them, or whatever else you like on your pancakes.  But I just ate them plain because they were so good.  They kind of have an almost crepe-like texture, rather than a traditional pancake; they're a little more spongy.  I'm not saying that's a bad thing, because it isn't.  I'm just preparing you.
Posted by Kyra V. at 7:30 AM No comments:

Again I did not physically read any books this month.  But I did really enjoy a book we listened to at work - it was called Seraphina

by Rachel Hartman.  Yes, it's young adult, but it's no Twilight.  It takes place in an alternate world that has a largely medieval feel to it.  In this world, it has been 40 years since a big war ended between humans and dragons.  And they've been living in relative peace, but there's still a definite divide between the two.  Some dragons live amongst the humans in their saarantrai form, but they are heavily monitored and largely untrusted.

The main character (Seraphina) has a big, but extremely predictable, secret.  The description on the back of the book made it seem like this was going to be the biggest mystery of the book, but it really isn't.  Which is good, because like I said - super predictable.  There are lots of other better mysteries involved in the book, so that's nice.  But I think the thing I liked the most about this book was the characters - especially Seraphina herself.  She just felt really... real.  Her reactions, her thought processes, they were all very well written.

Like I said, it is a young adult book, so of course there was some romance.  But it too is well written and not the biggest focal point of the book.  Important things are going on and there just happen to be FEELINGS on the side.  And the characters involve still manage to make responsible, reasonable decisions without letting their FEELINGS take over and rule their every actions.  So I really liked that too - I hate it when a character finds love and that's suddenly the only defining characteristic of her life.  So lame.

If you are into mysteries, dragons, and fantasy settings, you'll probably really enjoy this book.
Posted by Kyra V. at 7:30 AM No comments:

I Want That - Garden Prep

Lately, all I can think about is gardening.  It's understandable, considering how cold and icy and terrible this winter has been.  I'd much rather have just had one big snowstorm and gotten it all out of the way instead of this whole daily snow and ice thing.  I'd appreciate just one warm weekend so I can get out in the yard and start prepping the garden for spring.  Until then, I'll just keep obsessively looking at gardening supplies on the internet. Email ThisBlogThis!Share to TwitterShare to FacebookShare to Pinterest
Labels: garden, I Want That, shopping

Row 1: The cats continue to be adorable and traffic continues to be annoying.  Such it the way of the world.
Row 2: I made salmon for dinner and the cat swarm feasted on the skin.
Row 3: The weather sucked pretty much continuously.
Row 4: I played laser tag and with my new favorite pet app - Pou.
Row 5: Heresy the kitten is a great helper.  We moved the reptiles around, so I have a new office mate in the shape of Lizard, the bearded dragon.  We're really creative namers.
Row 6: I made super unhealthy waffles and super healthy pancakes.  More on the pancakes soon.
Row 7: We went to Eastern State Penitentiary for our anniversary, as you've seen.
Row 8: My parents gave us this awesome wedding album for our anniversary.  We also got a bunch of nice cards.
Row 9: My uncle installed new stairs and Kim taught me new math.
Row 10: For Valentine's day, we made more flower arrangements at work.  We also ate delicious brownie batter donuts - the best and worst food ever made.
Row 11: Went to the Goodwill with Kylie and talked a little too much about "lady problems" (read: menstruation) at the dinner table for my dad's taste.

...with my parents.  That's right - Chris had to work late last night, so I spent a romantic evening with my parents and my sister.  We had steak and salad and baked potatoes for dinner, with refreshing whiskey sours to wash it all down.

For dessert we had homemade creme brulee and chocolate covered strawberries.

My dad makes a killer creme brulee, let me tell you.

The chocolate covered strawberries came from Christie's Memorable Cakes in Fleetwood.  He asked if I would post this business card for anyone who is interested.  You can also check out their website for more information.

For our first wedding anniversary, Chris and I took a day trip to Eastern State Penitentiary in Philadelphia.  I know this probably does not seem like a very romantic destination to most people, but I think it suits us. 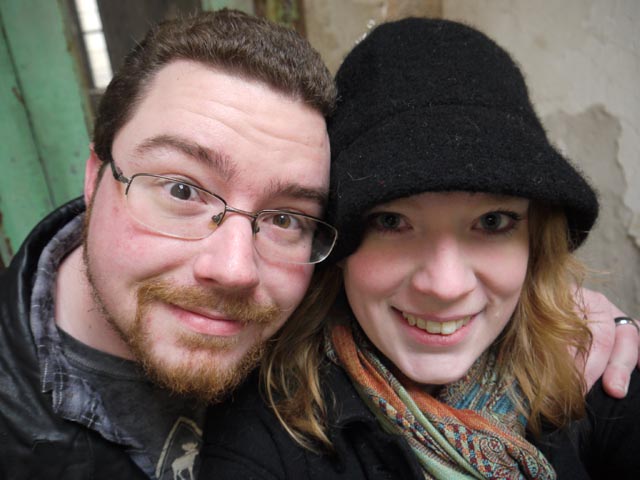 Just a warning, this is about to get super image intense.  So if you've got a slow internet or whatever, maybe save this one for later?

After we were done touring the prison, we got dinner across the street at Jack's Firehouse, which is an amazing restaurant located in an old firehouse (as you could probably guess from the name).  Every single thing we had to eat was wonderful.  So wonderful in fact that I almost finished my entire 10oz cheeseburger.  So good!