I was talking to Chris the other night about what we would do if we had limitless time to do whatever we wanted all day.  He had tons of things, but I was unable to think of anything.  Besides working on my side business, browsing social media, and watching Netflix until I fall asleep, I don't really have any hobbies (if you can really call those things hobbies in the first place).

But the more I thought about it, the more I realized I used to have hobbies.  I liked to draw.  I liked to read.  Why don't I do these things anymore?  Because I don't have time?  That is what I suggested, but Chris insisted that if I stopped doing the time-wasting things listed above, I could instead fill that time with these real hobbies.  And he's absolutely right.  I have, for the most part, let pointlessly staring at my smartphone eat up most of my time.

Don't get me wrong, I am not even vaguely anti-smartphone.  It is like a limb to me and I always have it around and on.  I like the ability to be in constant contact with the people I care about.  But there is no reason to spend 3-5 hours a day scrolling through Facebook and tumblr because I "have nothing better to do."  I clearly DO have better things to do.

In an effort to rectify this situation, I am reinstating my resolution to read at least one book per month, a goal that lasted exactly one month.  But I think there's still time to catch up - even now that I am 2/3 of the way through the year. The book I am picking for August is The Woman in Black, since it is still sitting unread on my Kindle.  I bought it as one of five books to read on the cruise and just never got to it.  I'll report back when I've finished.
Posted by Kyra V. at 10:13 PM No comments:

Up to 9 pounds total gained this week - not up too much from last week.  Hopefully it evens out for a little while, although I'm not hopeful.  The internet tells me that this second half is when the numbers really start rising. 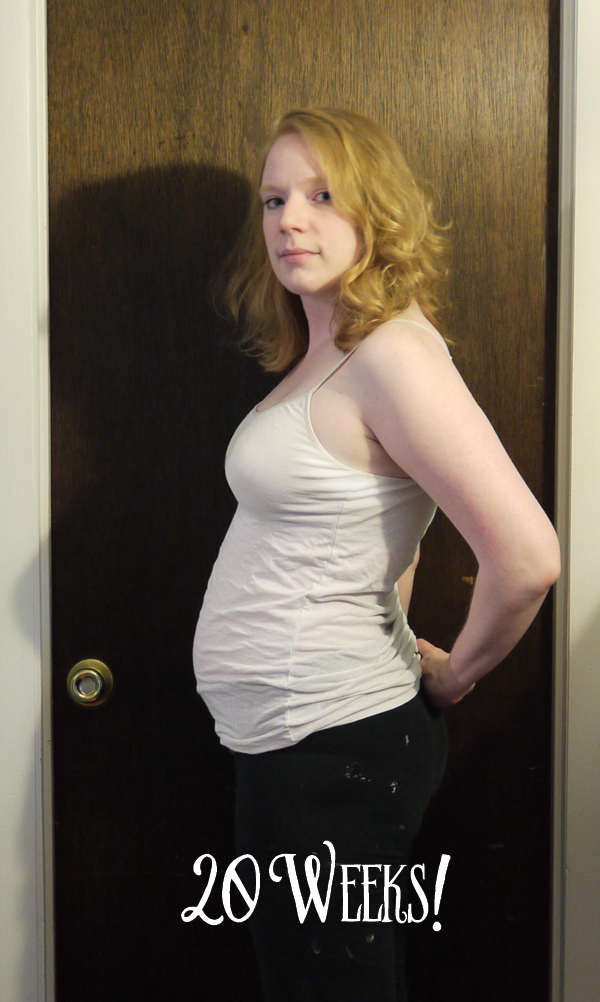 Up to 8.8 pounds this week.  I'm afraid this baby is going to be immense! 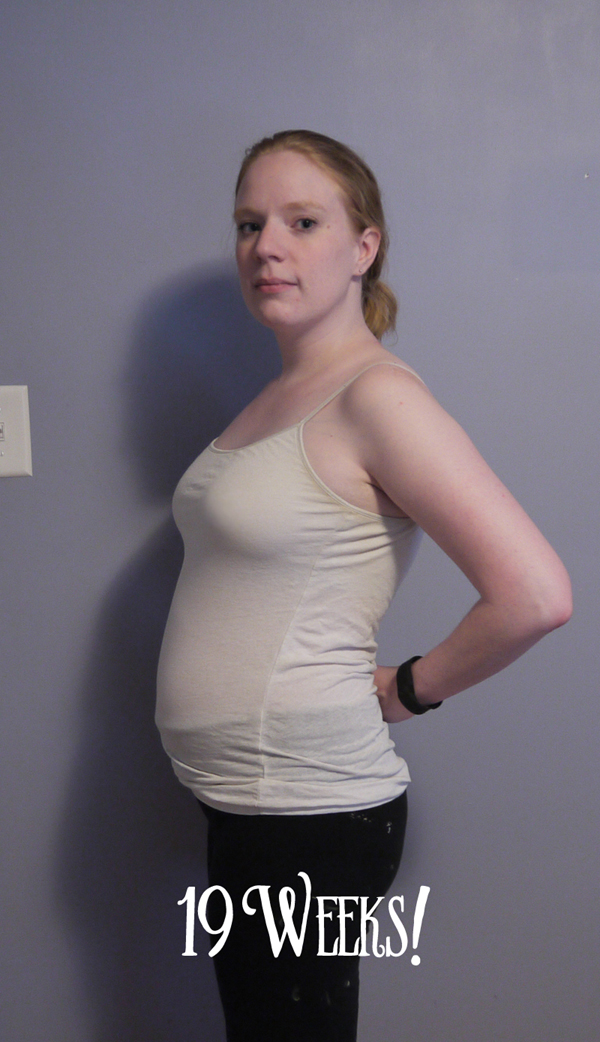 Well now I'm up to 6.9 pounds, so that was quite a jump.  But the doctor said that judging by the ultrasound measurements (everything looked perfect, by the way), our baby probably weighs around 9 oz.  At 18 weeks, it should weigh 6.7!  So I'm just gonna go ahead and blame this one on the baby! 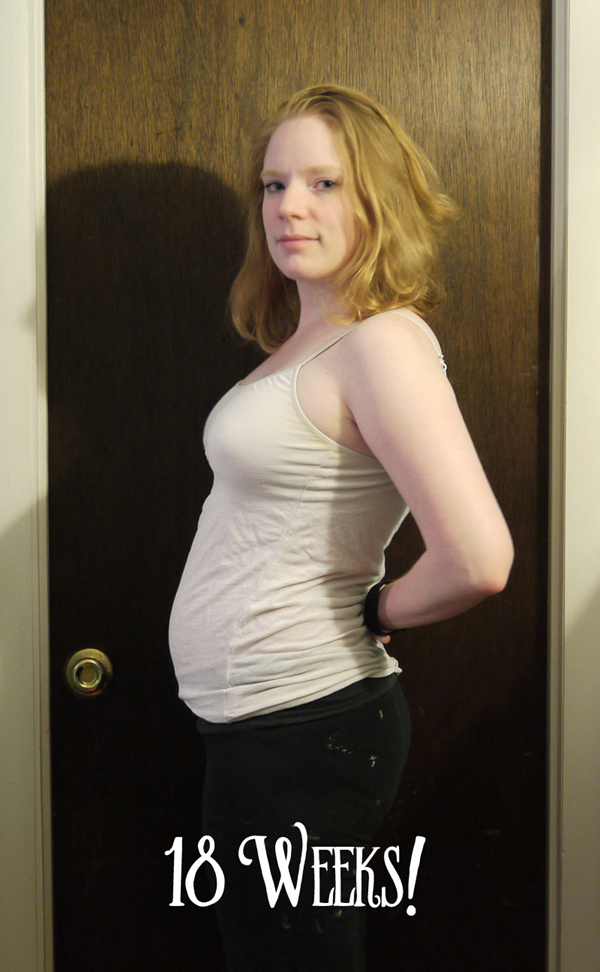 So far I've gained 5.0 pounds - that's not so bad, right?  Our anatomy scan is on Thursday - I can't wait.  I hope everything is going well in there! 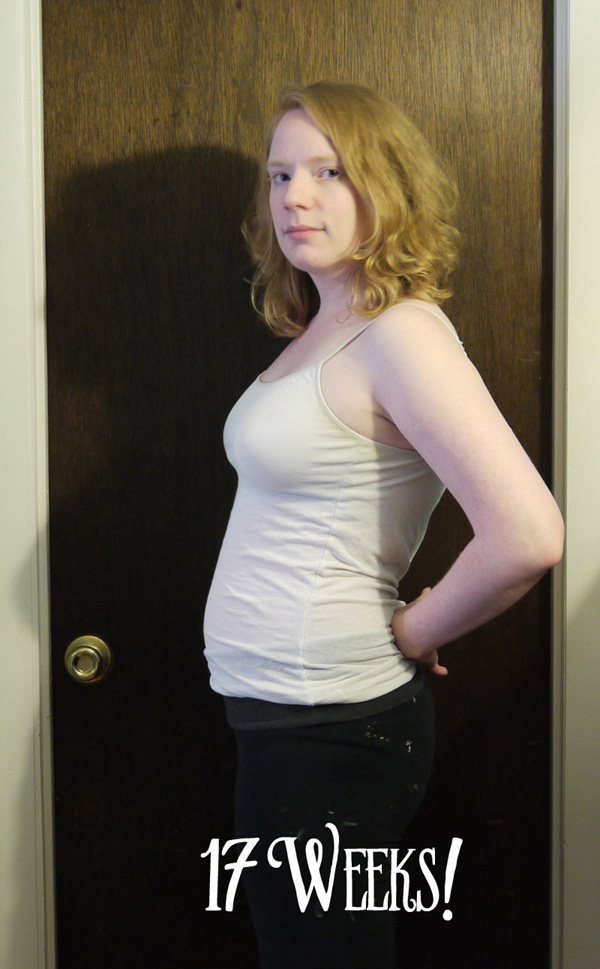 This photo was originally taken on June 28th. 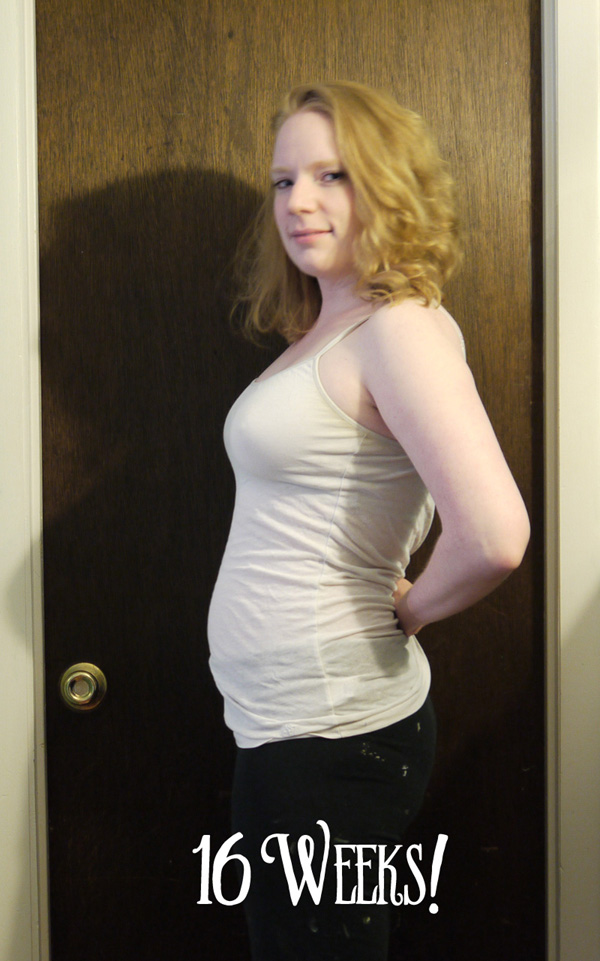 There's quite a large jump in weeks because of my uncertainty, but I started taking actual weekly photos at week 15.  This photo was originally taken on June 21st. 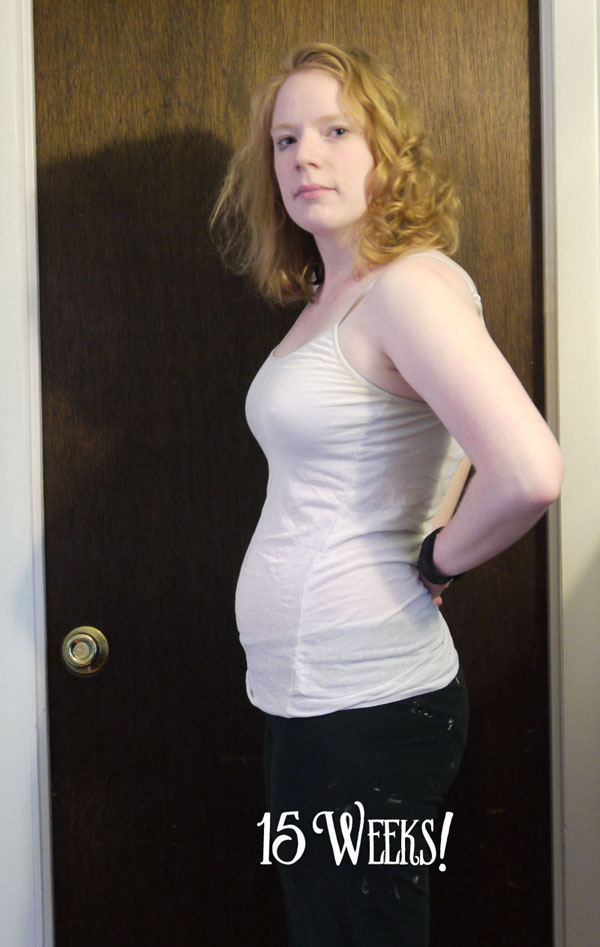 This is the first pregnancy photo I took - I waited a while to take one because, as I mentioned in my previous post, I wasn't sure that it would work out.  That should also explain the less-than-pleased look on my face.  This photo was originally taken on May 4th, for reference. 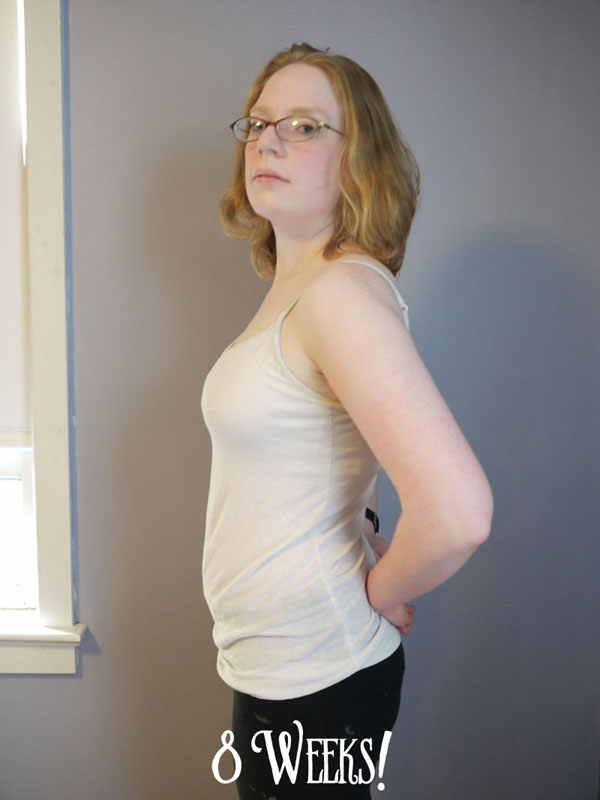 So you might have noticed that I've been gone for kind of a while.  Like five months.  Almost half a year.  Sorry about that.  I'm not sure if I've mentioned this before - I feel like I must have at some point - but sometimes I get so stressed out and overwhelmed by life that I just can't bring myself to blog.  Just thinking about editing photos makes me so exhausted that I can't even bear to go into my office.

Well, the beginning of the year was one of those high-stress times.  You see, Chris and I had been trying to have a baby.  We' been trying for quite a long time and the stress of getting super excited and hopeful every month only to be let down and crushed over and over again was just really starting to get to me.  I pretty much gave up hope, and that was very sad.  It was one of the most stressful things that I'd ever been through - which brings me to my next point: we were finally successful.

That's right, we are expecting a wonderful new addition to our tiny cat-filled family in December.  I literally could not be happier about it - I still can't completely believe that there will actually be another person living in our house in a few short months.  It seems too good to be true.

And so you might be wondering why it took me so long to come back here and share this amazing news with you.  Well, it turns out that being pregnant is just as stressful as trying to conceive- maybe more so.  Or it is for me at least.  I am, in case you haven't picked up on this by now, a natural worrier.  This was made worse by the fact that I spotted (and outright bled - leading to a very terrifying but ultimately uneventful night in the emergency room) throughout the entire first trimester.  So I spent April and May convinced that it was only a matter of time until I lost this baby I had tried so hard to achieve.  But ultrasounds and blood tests and doppler broadcasts of a tiny but strong heartbeat have finally convinced me that maybe - just maybe - this is happening for real.  I'm 17 weeks along now and, though I know there's still plenty of time for things to go horribly wrong, my doctors and percentage charts on the internet have mostly persuaded me that we're relatively safe now.

So there you go.  Hopefully I'll be able to resume posting now that I'm starting to feel a little more at ease.  And I wanted to get all of this out there in case there are any other ladies who are feeling overwhelming fear and anxiety instead of the joy and excitement they're "supposed" to be feeling.  You're not alone, other scared ladies.  This is a frightening and uncertain process at best.  Anything can happen and there's very little you can do to control it - there's every reason to be scared!  It doesn't mean you're any less happy to have finally received that positive test or that you love your baby any less.  You're just being realistic, and I fail to see how there's anything wrong with that.
Posted by Kyra V. at 9:55 AM No comments: